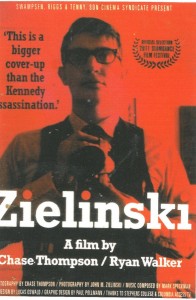 The real structure of power in this world is invisible. It has nothing to do with politics or ideology. Money is only at the periphery of the core operation. Systemic power is systemic blackmail. Networks of mutual blackmail own virtually every western government. Blackmail is the diabolically clever means of enforcing a transnational network of invisible control. The price of admission to the club is controlability by those already on the inside. You need not be compromised to begin with, but you must be willing to compromise. Murder, pedophilia, mind control, child torture and abuse are the primary tools of the real controllers of our governments.

Zielinski: “I once had a successful career as a photojournalist, documentary film maker and author/ publisher documenting the Iowa and Amish lifestyle but have spent the past 25 years pursuing and attempting to expose the satanic pedophile/intelligence nexus which controls this country. Early on I received a draft copy of the film “Conspiracy of Silence” from Nebraska State Senator John DeCamp, re-worked it, helped distribute it on VHS then DVD’s and eventually on the internet, after which it went viral. This explosive documentary from Yorkshire TV of England was to be broadcast on the Discovery channel in May of 1994 until a hidden hand pulled the strings to cancel it. All copies were ordered destroyed except for the preliminary draft which I helped to rework, copy  and distribute.